The winners were selected from 522 entries from media professionals in the 11 Greater Bay Area counties. Competition was for work done in 2006. Entries were judged by the Florida Press Club, Milwaukee Press Club, the Press Club of Cleveland, San Diego Press Club and the Press Club of Southeast Texas. The photography staff of the Orange County Register judged the photo entries coordinated by Paul Sakuma of The Associated Press.

The San Jose Mercury News took home the most awards (hope the new editor is reading this!). Posing with the awards were, from left, Nerissa Pacio, Brad Kava, Mike Antonucci and Rich Ramirez.

The San Mateo Daily Journal staff was a big winner in this year’s contest for papers under 75,000 circulation. 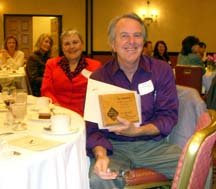 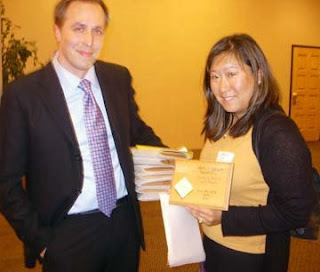 Among radio stations, KCBS All News 740 was the champion, taking home this stack awards. Holly Quan, right, won in the Special Program category. 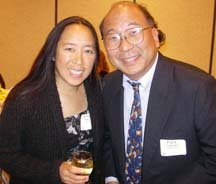 Patty and Paul Sakuma were on hand Saturday night. Paul, who is with the AP, received three awards. 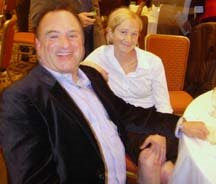 Brad Kava of the Mercury News was honored in the Serious Feature Story category with a piece headlined “Road Life Wearies Harmonica Virtuoso.”

Jamie Casini and Eric White of the Palo Alto Daily News shared the award for best headline for this gem “Dip in CHiPs.”

Jay Thorwaldson, editor of the Palo Alto Weekly, picks up one of the many awards his paper won. 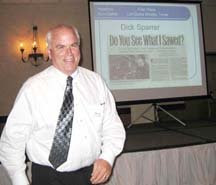 Dick Sparrer of the Silicon Valley Newspaper Group wears many hats. He earned six awards — for editorial, column, sports column, sports story, game story and headline. Is there anything in the newsroom this guy doesn’t do?

Kristin Bender of the Oakland Tribune, right, won the first place award for serious news feature for her story titled “Murder and Redemption.” 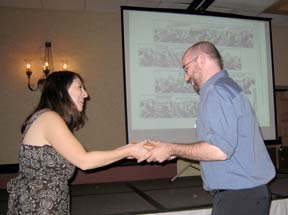 Justin DeFreitas of the Berkeley Daily Planet had the audience laughing out loud when they saw his editorial cartoons. The Planet won six awards this year. 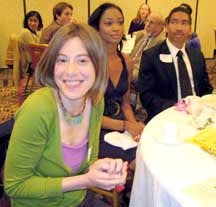 Julia Scott of the San Mateo County Times seems to be in disbelief after winning four awards. 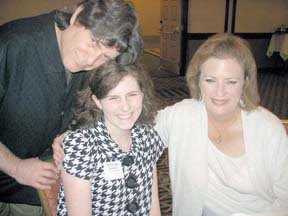 Two $1,500 scholarships in the name of the late San Francisco Chronicle columnist Herb Caen were awarded this year. One went to Hannah Hoffman, center, of Burlingame High School. The other went to Shaminder Dulai of San Jose State University (not pictured).
Photos above by Paul Sakuma, Micki Carter and Dave Price.